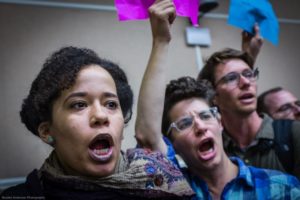 night the Berkeley city council decided yet again to postpone a potentially historic vote to withdraw the city of Berkeley from participating in the Urban Shield war games and militarized SWAT training.

More than 200 community members and Berkeley residents came out to show their opposition to Urban Shield and to pressure the Council to listen to their constituents. Many people waited through a packed agenda for nearly 6 hours, some camped out in the downstairs lobby due to an already crowded upstairs chambers, in order to have their voices heard.

“SWAT teams break down the doors of Black and Brown community members’ homes to serve search warrants at four and five in the morning using tactics they learned at the Urban Shield training,” said Sagnicthe Salazar, a member of the Stop Urban Shield Coalition and the Xicana Moratorium Coalition. “The decision to postpone the vote has nothing to do with the lateness of the hour and everything to do with members of the council bowing to political pressure from Berkeley PD and 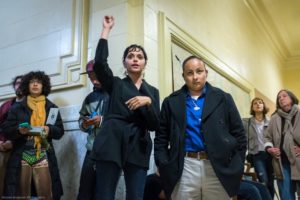 Despite the large and visible presence of people clearly organized around the Urban Shield agenda item, Mayor Jesse Arreguin intentionally chose to push the agenda item to the very end of the meeting. The Stop Urban Shield Coalition believes that this strategy was used deliberately to limit the number of voices present to speak out against Urban Shield; despite this at least 100 people remained to give testimony on the item which did not begin until around 11:30pm.

“Berkeley residents came out to this meeting in force to let the Council know that we understand the harmful and far reaching effects that militarized trainings for cops have on communities” said Ellen Brotsky, a Berkeley resident and a member of Jewish Voice for Peace, “Not only is Urban Shield antithetical to Berkeley values, it also undermines the ability of cities like Berkeley to seek out community-based alternatives to Urban Shield.”

Then, in a clear undermining of the democratic process, the Council decided at 12:30 am that they would adjourn and that they would not cast a vote concerning Urban Shield at this meeting.  While the crowd erupted in boos of anger and disappointment we remained disciplined and organized and collectively decided to 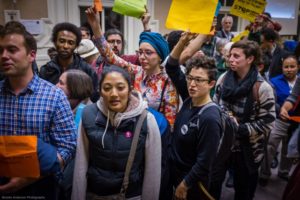 exercise our power to end the meeting on our own terms. We walked out before the conclusion of the meeting with chants of “Stop Urban Shield” echoing in the hallways. This move showed the City Council that the community will not tolerate this kind of manipulation. The council moved to set another meeting at a date and time to be determined where they assured those present that a vote would be held. The Stop Urban Shield Coalition will ensure that the meeting is held in a space that can accommodate the powerful showing of our community, and turn out in force again, larger and stronger to raise our demands.

The decision to further postpone this vote, rather than taking the decisive action that Berkley needs, undermines the trust that the people of Berkeley have placed in their elected officials and calls into question the legitimacy of the Council as a decision-making body. Furthermore, the call to postpone the vote is a slap in the face to community members, working people, mothers and fathers, who gave hours of their time waiting for the item to be 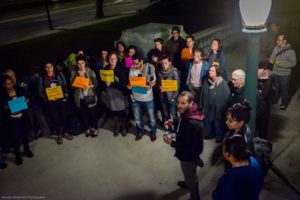 called as well as organizers who for the third time in as many months, met with council members, outreached to community leaders, and mobilized people to the meeting.

The Stop Urban Shield Coalition is urging people to email and call the Council members and let them know how you feel about this further postponement and urge them to take swift action to end Urban Shield:

Please stay tuned for more information on the promised vote and how to mobilize and/or support.