On Tuesday January 10, the Alameda County Board of Supervisors will decide whether or not to allow the county Sheriff to receive funding for the Urban Shield police war games and weapons expo.

Tell Alameda County Board of Supervisors: No to Militarization! Vote No on Urban Shield!

1. Call the Board of Supervisors Today, January 9th. Tell them to vote no on Urban Shield!

Please spread the word and encourage your friends, family, co-workers, and neighbors to let the Board know, we want and end to Urban Shield now! Use the script and contact below or click here.

Sample script:Dear Supervisor _________,I am calling/writing to urge you and all Alameda County Board of Supervisors to take leadership in putting an end to the militarization of police and the militarization of disaster preparedness in Alameda County. On Tuesday, you will be asked to decide whether to authorize the Sheriff to enter into an agreement with the Department of Homeland Security’s Urban Areas Security Initiative. This agreement will give the Sheriff access to funding for the notorious Urban Shield training and weapons expo. As you are surly aware, the divisive election of Donald Trump has raised concerns about an increase in militarized policing and attacks on immigrants, Arabs and Muslims, communities of color, and poor people. We call on you to stand with the communities you represent against such harm. Ending the divisive, dangerous, and xenophobic Urban Shield training and weapons expo is one significant way to do this. Tomorrow, we urge you to say no to the authorization of any funding for Urban Shield. Thank you.

2. Bring yourself and your people out to a Rally and Press Conference on Tuesday, January 10th against Urban Shield. Afterward, pack the boardroom to show that our communities reject Urban Shield. We will meet at the Alameda County Administration Building at 1221 Oak St, Oakland, CA 94612.  Please share the Facebook event page widely!

By listening to the clear and powerful voice of Alameda County Residents, the Board of Supervisors has the opportunity to shift away from the cynical fear mongering at the heart of Urban Shield and toward an approach that responds to genuine Bay Area disaster threats by investing in health, food security, emergency shelter, and community resilience. 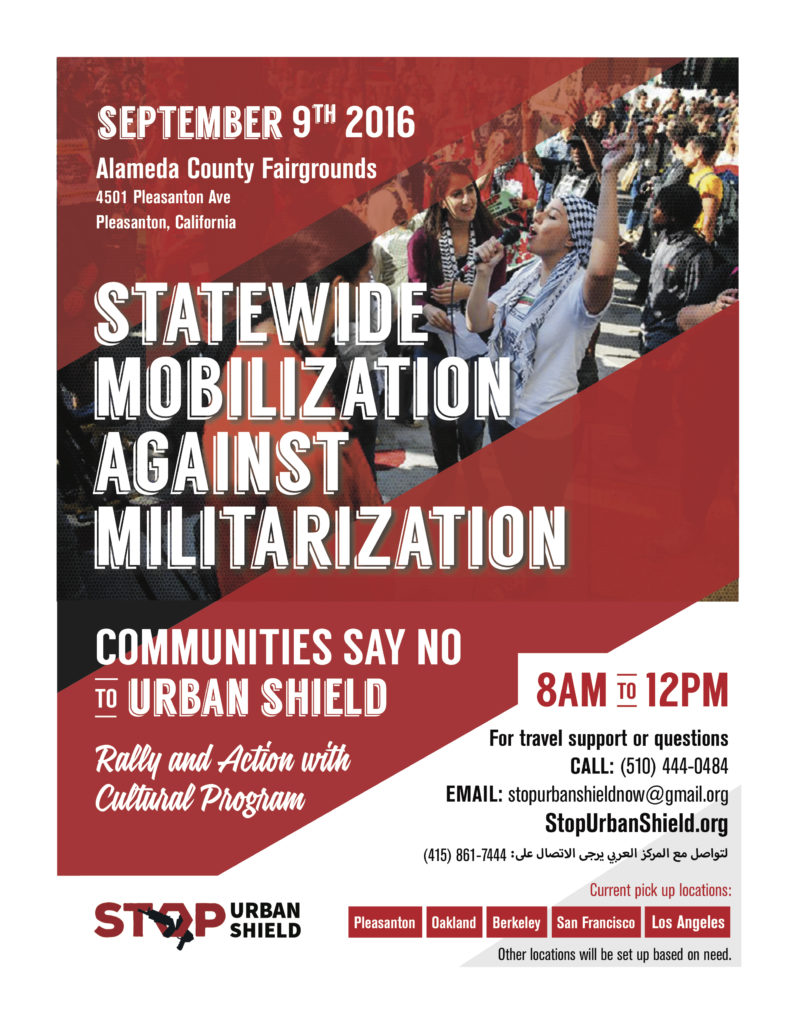 On June 24th, 2016, close to 100 people attended the second town hall hosted by the Stop Urban Shield Coalition at the East Bay Media Center. The event was co-hosted by the Anti-Police Terror Project and Berkeley Cop Watch. Community members learned about the damage caused by militarization and Urban Shield, SWAT training and military-grade weapons expo held each year in Alameda County, with war game exercises throughout the Bay Area. Devastating stories from people who have survived and lost family members to police violence showed the harmful effects of policing, which targets communities of color and is made worse by Urban Shield. Yet, it was clear that community power to stop militarization and Urban Shield is strong. The night ended with inspiring calls to action to build off recent successes and show up for a mobilization at the Urban Shield weapons expo in Pleasanton on September 9th, 2016. 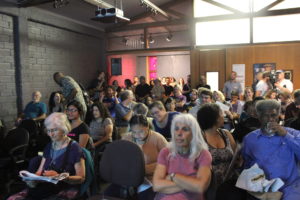 Isaac Ontiveros, member of Critical Resistance, explained how Urban Shield has been spearheaded by Alameda County Sheriff Gregory Ahern in 2007, which receives federal funding from the Department of Homeland Security to host Urban Shield. The federal program is called the Urban Areas Security Initiative (UASI) . San Francisco City & County is the fiscal agent for the entire Bay Area UASI region. The Alameda County Board of Supervisors authorizes the Sheriff to an agreement between the Alameda County and San Francisco County for the distribution of Fiscal Year 2015 UASI regional funds for emergency preparedness in the amount of $5,915,179 for the period 11/1/15-2/28/17.

Local, federal, and international law enforcement agencies participate every year to train on so-called “counter-terrorism exercises” along with fire departments and, emergency medical services.The merchandise sold at the expo is evidence of the racist nature of racially profiling communities of color; for example,a “Black Rifles Matter” t-shirt with a picture of an AR-15. 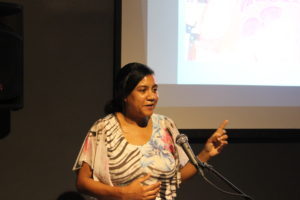 Maria Moore spoke about the death of her sister Kayla Moore. Moore, a black transgender woman who had been diagnosed with schizophrenia, was killed by Berkeley police officers after being arrested from her home. BPD officers attempted to justify the murder of Maria Moore by alluding to her “large stature” and her “obesity.” Maria compared her sister’s case with the death of Eric Garner. She also emphasized the need for increased mental health professionals and funding to help those in needs rather than allocating those funds for a militarized police force that ultimately intimidates and endangers communities of color.  For more information, please visit: Justice 4 Kayla Moore via Facebook.

In addition, militarization of police is enabled and furthered by the global character of policing and repression. Ontiveros highlighted the relationships between repressive regimes such as those in Hondurus, Mexico and the apartheid state of Israel with the United States and Urban Shield specifically. The Israeli military and law enforcement have a history of training American law enforcement on “counter-terrorism,” which translates to overt apartheid practices on communities of color in the United States. Vendors like Motorila, Safariland, and 3M, have business ties with the State of Israel and sell their security-related merchandise at Urban Shield.

A representative of the International Jewish Anti-Zionist Network (IJAN) discussed the participation of medical services in Urban Shield trainings. Both public and private medical service personnel, who participate, are trained with protocols to coordinate with law enforcement during crises and “acts of terrorism.” The negative impact of these trainings results in emergency responders shifting medical professionals’ primary responsibility of providing care to the injured into an allegiance to the priorities of the police, as in the case of Maria Moore. 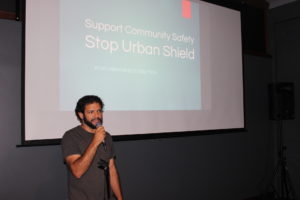 Nanci Armstrong-Temple from the Anti Police-Terror Project (APTP) started off by talking about APTP and the Onyx Organizing Committee and then discussed police militarization as it’s been linked to the death of Yuvette Henderson (among many others) in Emeryville. Armstrong-Temple shared a personal experience about the bridge shut down in January from the MLK weekend of actions and how a police officer held her and she feared for her life as a result. She explained that what that police officer did was a strategy, and that similar (violent) strategies are being taught at Urban Shield trainings. Armstrong-Temple also connected the struggle for police accountability and the creation of community-based safety programs to Black liberation movements throughout US history.

Emma, Charlotte and Andrea of Berkeley CopWatch spoke about the current militarization of the Berkeley Police Department (BPD). In 2012, the University of California, Berkeley planned to purchase a military armored personal vehicle known as the “Bearcat,” which is designed to withstand explosions from heavy munitions and improvised explosives. In 2012, under public and community pressure, the City Council of Berkeley rejected the request of UCB PD to purchase the “Bearcat.” A mutual aid agreement allows BPD to “borrow” armored personal vehicles from Alameda PD. In 2014, BPD cracked down on protestors during a Black Lives Matter action with their mutual aid agreement to use helicopters and armored vehicles. Video of the protests show the use of tear gas and so-called “non-lethal” munitions. Berkeley Copwatch highlighted key takeaways from the militarization of the BPD:

In 2016, the UC student government passed a resolution to ban UCPD from participating in Urban Shield, which shows the consistent resistance of people to prevent the militarization of the police.

Shereen Masoud, from the Arab Resource and Organizing Center (AROC), spoke about the on-going project of community outreach to document any stories of police violence and SWAT raids. If you would like to share your story, please email us at: stopurbanshieldnow@gmail.com or visit our website: stopurbanshield.org.

Lara Kiswani from AROC and Sagnicthe Salazar from Xicana Moratorium Coalition inspired the room to mobilize for the upcoming Urban Shield weapons expo at Pleasanton on September 9th, 2016 to outreach to communities and organizations that want to end Urban Shield: “To withdraw resources from police and invest the funds in strong community-run healthcare, social services, and non-militarized “whole community” approach to emergency response. 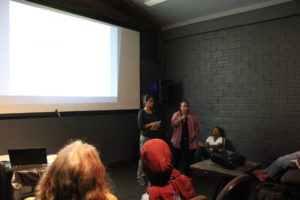 Two victories from the past two years include: