All Out to the SF Board of Supervisors! Say No to Urban Shield!

This Thursday, February 2, 2017, the San Francisco Board of Supervisors Budget and Finance Committee will discuss and vote on a resolution authorizing designated City and County officials to execute and file on behalf of the City and County of San Francisco any actions necessary for the purpose of obtaining State and Federal financial assistance under various grant programs, including the Federal Fiscal Year 2017 Urban Areas Security Initiative Grant. This currently includes Urban Shield.

Demand that the Supervisors exclude Urban Shield from the resolution tomorrow!

As the fiscal agent for Bay Area UASI funds, the SF Board of Supervisors has the power to exclude Urban Shield as a program funded by this money. Let’s turn out strong for this meeting! As we have seen with the ban on refugees from Syria and immigrants from predominantly Muslim countries issued by Trump on Friday, this administration and the Department of Homeland Security (which provides the funds for UASI and Urban Shield) will stop at nothing to bring harm to our communities. 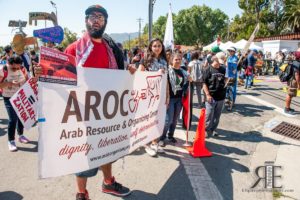 San Francisco has already demonstrated that it wants to push back against this executive order as well as the systematic dismantling of other protections for Muslim, Arab and immigrant communities such as Sanctuary City ordinances. Urban Shield is part and parcel of these recent actions and will contribute to the continued war on our communities and families here in the Bay Area and around the world. Join us to put an end to it.

Community to Mobilize on 2/28 to the SF Board of Supervisors. No War on our Communities!